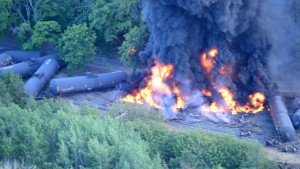 Today marks the three-year anniversary of when a volatile oil train derailed in Lac-Mégantic, Québec, incinerating the town center and killing nearly 50 people. This type of explosion remains a very real threat in cities and towns throughout Washington state, as we saw just last month with the close-to-home oil train derailment and explosion along the Columbia Gorge near Mosier, Oregon, and a prior derailment in 2014 under the Magnolia bridge in Seattle.

Despite the recent explosion – which occurred unsettlingly close to a nearby elementary school – Union Pacific is right back at it running trains along the same lines, and Big Oil is pushing to expand infrastructure to extract and transport even more crude oil through the state.

Take a stand this week during the July 6-12 Stop Oil Trains Week of Action to stand up to Big Oil and demand a ban on oil by rail! Upcoming events will be held in Bellingham, Hoquiam, Burlington, Chehalis, and Seattle:

In the three years since the Quebec explosion, there has been more damage done by oil trains than the previous four decades combined, causing irreparable environmental damage and loss of life. Unless we make our voices heard, this risk to our families, communities, land and waterways will only grow. #StopOilTrains!